Simulation proves flexibility and efficiency of swarm assembly in practice 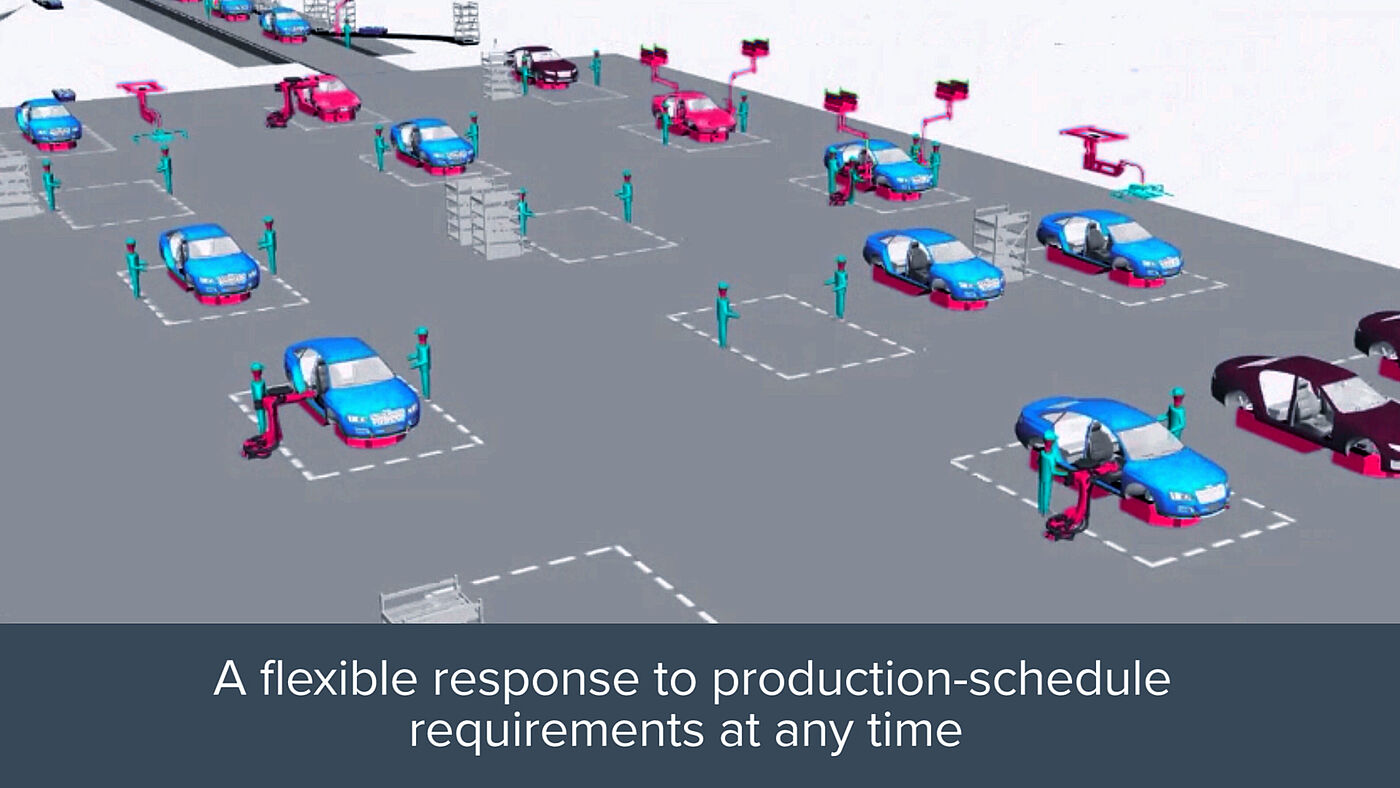 In recent times, many people have suggested that the era of continuous production is coming to an end because companies will only work using assembly islands in the future. However, Michael Weis, Ingenics partner and center of competence director, points out that it will only be possible to abolish the conveyor belt completely for certain products. With that in mind, he prefers the idea of combining the advantages of conveyor belts with the benefits of islands, coining the term “swarm assembly” to describe such a solution. This has already gained considerable attention and sparked discussion in specialist circles. The results of a large-scale simulation have now proved that this highly flexible and efficient solution works well in practice.

The associations of “swarm assembly” with terms like “swarm intelligence” and “swarm organization” are apt if one considers beehives or ant colonies: in both cases, more is achieved by the collective whole than by the sum of its members. In the age of Industry 4.0, our thoughts must also turn to big data, since the ability to process very large amounts of information without delay is a crucial prerequisite.

“It goes without saying that Industry 4.0 will concern every company department, but we have begun by concentrating on the assembly perspective and on electric vehicles in the premium segment,” explains Michael Weis. “In cases where price alone is all that matters and the level of variance is low, continuous line assembly will remain the best possible option.”

In contrast, swarm assembly is ideal for the production of premium vehicles, which is much more customized. This is because electric vehicles in particular have increased the number of vehicle variants. Additionally, the rising number of electrical and electronic components in vehicles has led to more assembly modules. When it comes to balancing production lines, it is therefore much easier to control the necessary levels of flexibility and efficiency with swarm assembly.

Use of new automated guided vehicles

When building new assembly systems, people should take the opportunity to use automated guided vehicles (AGVs) instead of the usual skillet lines and electric monorail systems. “In flexibly adapted final assembly plants, it will be possible to leave rigid skillet systems, realizing special requirements outside the line in so-called swarm areas before returning items to the line,” says Michael Weis in summary.

Furthermore, the possibility of removing vehicles from the production line into flexible work areas creates a more even workload. In terms of investment, there is no significant difference between AGV systems and skillet lines or monorails, so financial questions do not play a role. The space requirements of workstations in a swarm area are greater by only around 400 sq m (35%).

There is therefore much to be said for combining the various technologies freely as needed. As a result, there will also be collaborating robots in swarm areas – ones that can move to the appropriate vehicle as required, providing employees with parts, helping them with assembly, or even fitting parts on their own. Smaller AGVs deliver the parts to be installed in each vehicle to the assembly area just in time.

The basic principle of swarm assembly works well in practice, as demonstrated by the results of a large-scale simulation. These findings were based on real data from vehicles, assembly sequences, take rates, and equipment availability. Four vehicle variants were running on the same assembly line: a premium sedan, luxury sedan, convertible, and midsize sedan. In addition, 13 assembly modules were identified in total to be mounted in the swarm area – from the auxiliary heating and sound systems to the active chassis.

The results of the simulation are impressive indeed, resulting in four main findings that are crucial for practice:

2. The number of assembly stations is similar to a conventional assembly line.

3. Lead times for vehicles with little equipment is reduced by a considerable margin.

4. The necessary investment for new AGV technology is cost-neutral compared to conventional skillet systems, while offering much greater flexibility and efficiency.

Against this background, Michael Weis is keen to note: “Everything therefore speaks in favor of widespread implementation of swarm assembly from our point of view.”

The newly released Ingenics magazine No. 07 / 2022 is now available for download.

Ask an expert for a non-binding callback now

Ask an expert for a non-binding callback now